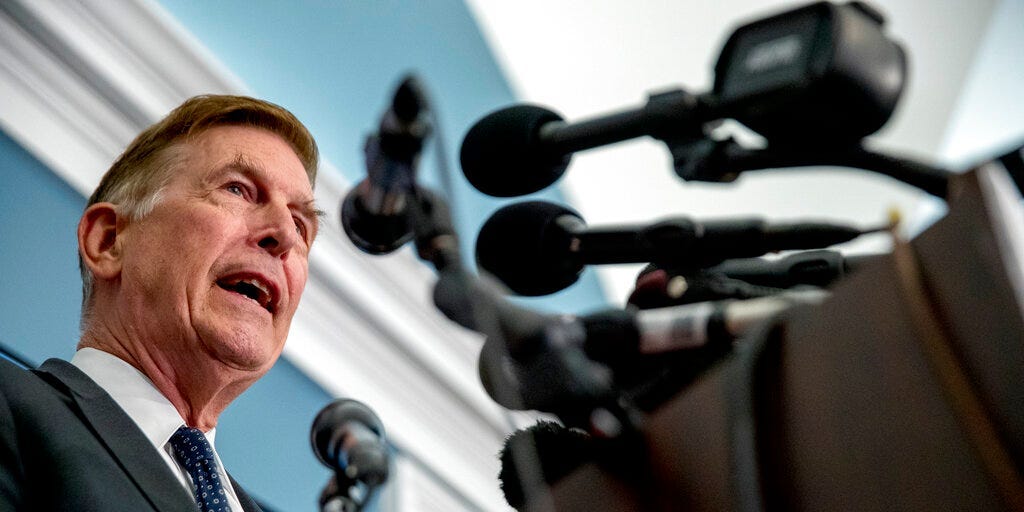 36 House Democrats roll out a bill to hit AR-15-style weapons with a 1,000% tax that could pass Congress without Republican support

"Congress must take action to stem the flood of weapons of war into American communities," Rep. Don Beyer said in a press release.
Thirty-six House Democrats introduced legislation on Tuesday to levy a 1,000% tax on AR-15-style rifles in an effort to try and severely restrict access to the weapons through a maneuver that wouldn't require any GOP support.

Rep. Donald Beyer of Virginia formally rolled out the "Assault Weapons Excise Act" alongside 35 House Democrats spanning the ideological spectrum. Some of them are centrists who face difficult re-election bids in the November midterms.

The 1,000% tax would apply to military-style "assault weapons" and high-capacity magazines capable of carrying 10 rounds or more, adding thousands of dollars to the final sales price of such guns in a bid to severly restrict their access. It would exempt ammunition, along with recreational weapons used for hunting.

"Congress must take action to stem the flood of weapons of war into American communities, which have taken a terrible toll in Uvalde, Buffalo, Tulsa, and too many other places," Beyer said in a press release, referring to a recent string of high-profile mass shootings.

"I have voted in the past for commonsense gun safety reforms only to see them run aground on Senate Republicans' filibuster; my bill presents a pathway to bypass that obstruction and enact lifesaving measures," the Virginia Democrat said. The filibuster is the 60-vote threshold that most bills need to pass in the Senate, meaning any Democratic bill needs 10 Republican votes to advance at the moment.

The measure would amount to a steep tax unlike any federal tax now on the books for firearms. The federal government already a 10% tax on certain handguns while ammunition is taxed at 11%.

It's intended to pass through budget reconciliation, a legislative maneuver allowing Democrats to sidestep GOP resistance and approve legislation with a simple majority vote. Democrats employed the tactic to pass President Joe Biden's stimulus law as well as the House-approved Build Back Better bill that later died in the 50-50 Senate.

Only measures that are deemed to have a distinct impact on the federal budget can be put into such a bill. Three budget experts told Insider that the bill would likely qualify to be included in a reconciliation package that Democrats hope to revive by summer's end, as it is structured as a tax.

"I think it passes the tests on the various requirements to qualify for reconciliation," William G. Hoagland, senior vice president at the Bipartisan Policy Center and GOP budget expert, told Insider.

His view was shared by Ben Ritz, director of the Center for Funding America's Future at the Progressive Policy Institute, another think tank. Ritz said the bill's tax rate is easy to adjust to ensure it generates enough revenue so it complies with the strict rules of reconciliation.

It's unclear how much money the tax on military-style assault rifles would raise. "A pure excise tax that isn't set so high as to end all sales should pass the Byrd rule," Zach Moller, director of the economic program at the Third Way think tank previously told Insider, referring the rule governing what meets the requirements to be included in a filibuster-proof bill.

For decades, Democrats have pushed plans to greatly step up taxes increases on guns and ammunition in a bid to discourage people from buying them. One proposal in 2020 from Sen. Elizabeth Warren of Massachusetts would have tripled the tax on handguns to 30% and nearly quintupled the tax rate on shells and cartridges to 50%.

The bill lacked a Senate Democratic co-sponsor, typically considered a sign of support in both chambers. Senate Democrats appear to be treading cautiously around the Beyer legislation.

They're trying to hash out a final bill with Republicans on a package of gun safety measures that include a modest expansion of background checks along with fresh spending on mental health initiatives and school safety.

Sen. Christopher Murphy of Connecticut has spearheaded the gun safety talks on the Democratic side, which yielded a breakthrough over the weekend. He held off from weighing in on the bill for now. "I have to take a look at it," Murphy told Insider. Others like Sen. Bernie Sanders of Vermont were noncommittal as well.

Warren was warm to the idea. "It's important to use every tool available and that includes taxes in order to put an end to the availability of weapons that are used for murdering people," she told Insider last week.
#Joe Biden
Add Comment