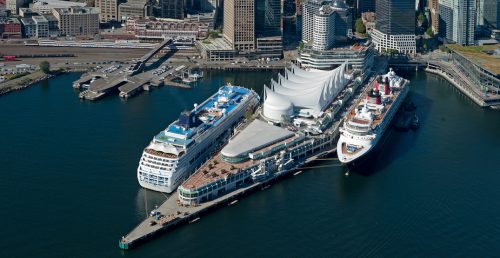 A total of 310 cruise ships are scheduled to visit the Canada Place cruise ship terminal in downtown Vancouver in 2022.
In terms of the total number of sailings, the 2022 cruise ship season in Vancouver is expected to be larger than what was recorded in the year just before the pandemic.

After a two-year pandemic hiatus, cruise ships are now just weeks away from sailing under the Lions Gate Bridge to reach the Canada Place cruise ship terminal in downtown Vancouver.

Local port officials and cruise lines have been planning for the restart of the cruise industry ever since the federal government lifted the ban on cruise ships accessing Canadian ports in November 2022.

The newly released tentative schedule by Vancouver Fraser Port Authority indicates a total of 310 cruise ship calls are expected for the 2022 season — 8% more than the 288 calls recorded in 2019.

The first sailing will be made by Princess Cruises’ Caribbean Princess on April 7, which will arrive at 7 am and depart at 4:30 pm on the same day with a new group of passengers. This 19-day sailing through the Panama Canal begins at Fort Lauderdale on March 19, and from Vancouver the vessel will make the same trip back to Fort Lauderdale. Its stops include Cartagena in Colombia, Panama City in Panama, Puntarenas in Costa Rica, San Juan del Sur in Nicaragua, and Cabo San Lucas in Baja California Mexico, as well as San Francisco, Astoria in Oregon, and Victoria, BC.

But Vancouver’s cruise ship season will not fully pick up until the final week of April, when at least one ship call is scheduled almost daily.

As the season progresses, as many as five vessels are scheduled on some days, including multiple smaller cruise vessels sharing the same berth.

Vancouver’s cruise ship itineraries mainly serve destinations to Alaska. Other returning vessels that served Canada Place prior to the pandemic and will be making numerous calls this season include Princess Cruises’ Grand Princess, Ruby Princess, Crown Princess, Royal Princess, and the Majestic Princess.

As well, Princess Cruises’ newest vessel, Discovery Princess, will be making calls on May 4 and September 25. The brand new vessel, carrying 3,660 passengers with 145,281 gross tonnage, was completed on January 27. It is set to be launched on March 18.

Cruise ships under the Princess flag will make a total of 49 calls to Vancouver this year.

Another 18 calls will be made by Norwegian Cruise Line, including the Norwegian Jewel and Norwegian Spirit. The 2018-built Norwegian Bliss, now ranked as the world’s 22nd largest cruise ship, will make a single call this year, arriving on the afternoon of April 21 and departing about 24 hours later.

Celebrity Cruises is currently anticipated to make 31 calls with the Celebrity Eclipse and Celebrity Millennium.

With 76 calls, Holland America will have the single largest cruise line presence in Vancouver this year, using vessels such as Koningsdam, Eurodam, Nieuw Amsterdam, Noordam, and Zuiderdam. The Zaandam — a previous season regular for Vancouver with frequent sailings — is noticeably absent from the schedule.

The Crown Princess is currently scheduled as Vancouver’s final sailing of 2022, set for November 2.

In a statement to Daily Hive Urbanized, Vancouver Fraser Port Authority says it is currently unable to provide an accurate 2022 passenger forecast due to the ongoing dynamic nature of changes to health and travel restrictions.

Prior to the pandemic, in 2019, Canada Place recorded a record of over one million cruise ship passengers, representing a year-over-year increase of 22% from 2018.

“The Vancouver Fraser Port Authority is currently working with industry, port communities across Canada through the Association of Canadian Port Authorities, and all levels of government to prepare for the upcoming cruise season,” reads the statement.

“As always, and within the context of the COVID-19 pandemic, the safety of local communities, and that of passengers and guests who visit Canada Place, remains our top priority. We continue to follow the direction of Transport Canada, the lead agency responsible for regulations and safety policies for the cruise industry. We look forward to welcoming cruise ships and passengers back to Vancouver in 2022.”

In 2019, each cruise ship that called at Canada Place generated an estimated $3.17 million in direct economic activity. Overall, the cruise industry generated $2.2 billion in local economic impact and supported over 7,000 jobs that year.

As of late 2021, Greater Victoria Harbour Authority was anticipating to see a total of 350 cruise ship calls in 2022.

The return of cruise passengers to Vancouver and Victoria will provide a much-needed boost for restaurants, hotels, entertainment and other hospitality-based businesses, as well as tourism-dependent businesses and attractions. But Victoria’s cruise industry activity is largely driven by mid-route stopovers for itineraries between Seattle and Alaska, as opposed to Vancouver serving as the vital homeport for the vast majority of its calls.

Cruise lines are anticipating a return to profitability in 2022, with the pandemic finally turning a real corner, and health and travel restrictions relaxed in a growing number of major global cruise markets.

For instance, as of earlier this month, it was reported that Royal Caribbean is now operating at 85% of its total fleet capacity, and seeing strong booking volumes on par with historical occupancy levels for the second half of 2022. The full fleet is expected to be sailing by this summer.