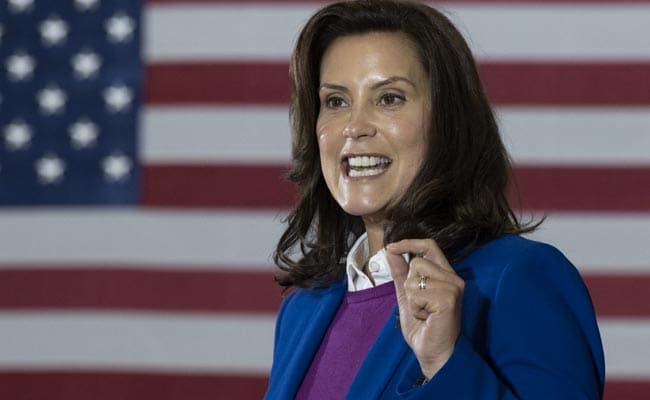 The court action comes two months after two militia members were convicted of conspiring to abduct Whitmer and detonate a bomb over the tough Covid-19 pandemic restrictions she imposed.
Three members of a far-right US militia group on Wednesday were found guilty of domestic terrorism charges including providing support to people who plotted to kidnap and kill Michigan Governor Gretchen Whitmer.

The court action comes two months after two militia members were convicted of conspiring to kidnap Whitmer and detonate a bomb over the tough Covid-19 pandemic restrictions she imposed on the northern state. They were among six people arrested in October 2020 following an FBI sting operation that uncovered the plot.

"Today, three defendants were found guilty of material support for terrorism, gang membership, and possession of a weapon while committing a felony in support of the plot to kidnap and kill me," Whitmer, a Democrat, said on Twitter shortly after the convictions were announced by Michigan Attorney General Dana Nessel.

"No threat, no plot, no rhetoric will break my belief in the goodness and decency of our people. And these verdicts are further proof that violence and threats have no place in our politics," Whitmer added.

Joseph Morrison, Paul Bellar and Pete Musico -- all from Michigan and described as members of the Wolverine Watchmen -- face up to 20 years in prison and $20,000 fines, the attorney general said in a statement. Sentencing is scheduled for December 15.

The kidnapping plot -- which Nessel's office said was aimed in part at inciting a US civil war -- caused a national uproar when it was revealed just weeks before the divisive 2020 presidential election.

"Terrorist attacks and mass shootings are not spontaneous events, they are the result of planning, plotting and amassing resources in a build-up to violent acts," Nessel said.

"The prosecution of these cases prevented horrific acts from taking the lives of innocent people."

The convictions come less than two weeks before Americans head to the polls in critical midterm elections to decide whether Democrats or Republicans control Congress, governorships and state houses across the nation. Whitmer is running for re-election in a tight race.
#COVID-19  #Covid
Add Comment