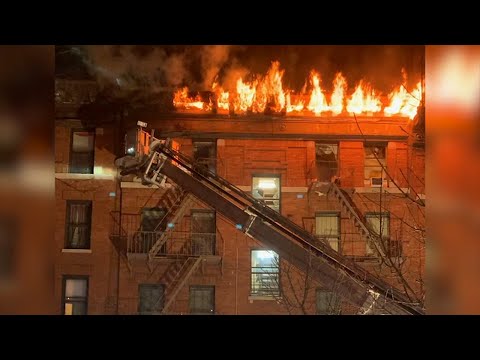 Nine children were among those who died when a space heater malfunctioned in a Bronx apartment building, city officials said.
A major fire in a residential apartment building in the Bronx in New York City on Sunday left 19 people dead, including 9 children, in what Mayor Eric Adams described as one of the worst fires the city has experienced in modern times.

A "malfunctioning electric space heater" was the source of the fire, Nigro said during a press conference. The heater was in the bedroom of an apartment, and the fire consumed the room and then the entire apartment, he said.

The apartment door was left open and smoke spread throughout the building when the residents left their unit, Nigro said.
"This is a horrific, horrific, painful moment for the city of New York, and the impact of this fire is going to really bring a level of just pain and despair in our city," Adams said.

About 200 members of the New York City Fire Department responded to the fire at the 19-story building at 333 East 181st Street. The fire began a little before 11 a.m. in a duplex apartment on the 2nd and 3rd floors of the building, the FDNY said.

Victims were found in stairways on every floor of the building, many in cardiac arrest, in what Nigro said could be an unprecedented loss of life. The injuries were predominantly from smoke inhalation, he said.

Firefighters kept attempting to save people from the building despite running out of air tank, Nigro said. Some of the residents who were trying to leave the building could not "escape because of the volume of smoke."

The FDNY posted several images of the scene showing ladders extending into apartment windows as well as a number of broken windows.
"This is going to be one of the worst fires that we have witnessed during modern times here in the city of New York," Adams said.

"I am horrified by the devastating fire in the Bronx today," New York Gov. Kathy Hochul said on Twitter. "My heart is with the loved ones of all those we've tragically lost, all of those impacted and with our heroic FDNY firefighters. The entire State of New York stands with New York City."

The residential apartment where the fire occurred is 50 years old and has 120 units, according to building records.

There have not been any major building violations or complaints listed against the building, according to city building records. Past minor violations were rectified by the property and there were no structural violations listed.
Add Comment