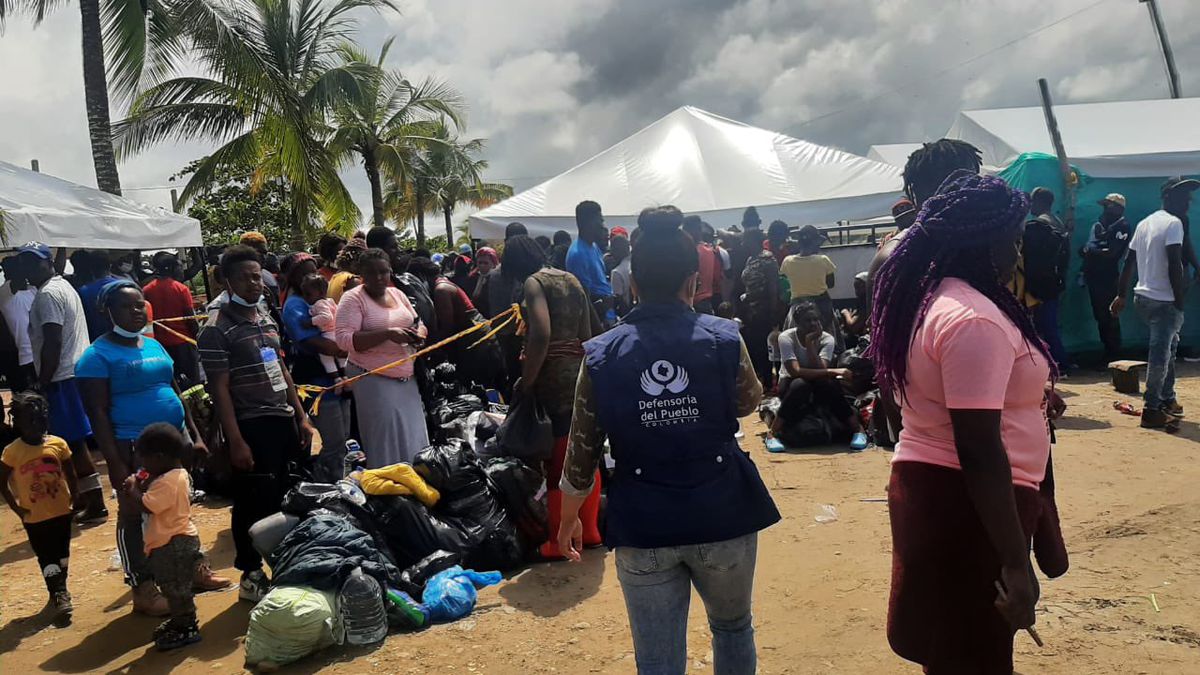 About 19,000 people, the majority of Haitian nationality, are stranded on the Colombian border with Panama, waiting to cross the dangerous Darien jungle, in a scene very similar to the one that has been repeating in recent months, according to the Ombudsman's Office.

This Colombian state body indicated that in recent days the number of migrants in transit who arrive at Necoclí has ​​increased, one of the last stops in Colombia before the Darien route, one of the most dangerous border crossings in the world.

"We have been able to verify that about 19,000 migrants are being dammed in this municipality (Necoclí), bound for Acandí (Chocó), for their transit to the border with Panama," said the Ombudsman, Carlos Camargo, on Wednesday.

This scene has been repeated in recent months, in which record numbers of people crossing this migratory passage have been registered, especially the Haitian population who comes from Chile and Brazil, where they have resided for years, but who have decided to embark on their route. to North America.

The Governments of Panama and Colombia agreed to let 500 people pass a day, but that number is not enough for the number that arrive, including many minors and babies, on this side of the border.

The companies that transport them from Necoclí to Capurganá by boat through the Gulf of Urabá are respecting the quota of 250 daily tickets each, but "there is an undetermined number of people who have not been able to purchase their tickets or who decide to cross the Gulf of Urabá in illegal boats, especially in the early hours of the morning, "said the Ombudsman.

In this way, they are exposed to shipwrecks and a greater violation of human rights, before crossing the Darién, a dense jungle where, in addition to flooding rivers, animal bites and inclement weather, migrants are exposed to robbery, abuse sexual and even murders on the part of those who transport them and the armed groups that operate there.


More than 18,000 migrants arrived in Panama from Colombia in July, according to the Government of that country, the highest figure so far this year, exceeding the more than 11,000 in June, very unusual figures for the rainy season, when the passage it is more dangerous and less traveled.

For its part, Migración Colombia reported that more than 27,000 people of different nationalities, especially Haitians, entered its territory irregularly in August, most of them through the border with Ecuador.

So far this year more than 70,000 people, including 13,000 children, have crossed the Darien region, a figure that equals the total of the previous five years, the International Federation of the Red Cross (FRIC) said this week.

Those same migrants are now also stranded on the border of Mexico and the United States, while the Government of Joe Biden has already begun to repatriate on flights to Haiti people who on many occasions have not lived in that country for years and with children who were not born on the island.

Oh ya 34 days ago
Stranded is when you can not leave where you are. As on a island if you boat sinks. These people can go south thus they are not stranded

Rosalind Laing 34 days ago
Colombia is allowng thesr people to reach this transit point. By now the Darienn has a well trodden roaf. The USA is flying them back to Haiti. So letting them trek to the US border does not make sense.
View all comments (2)Add comment