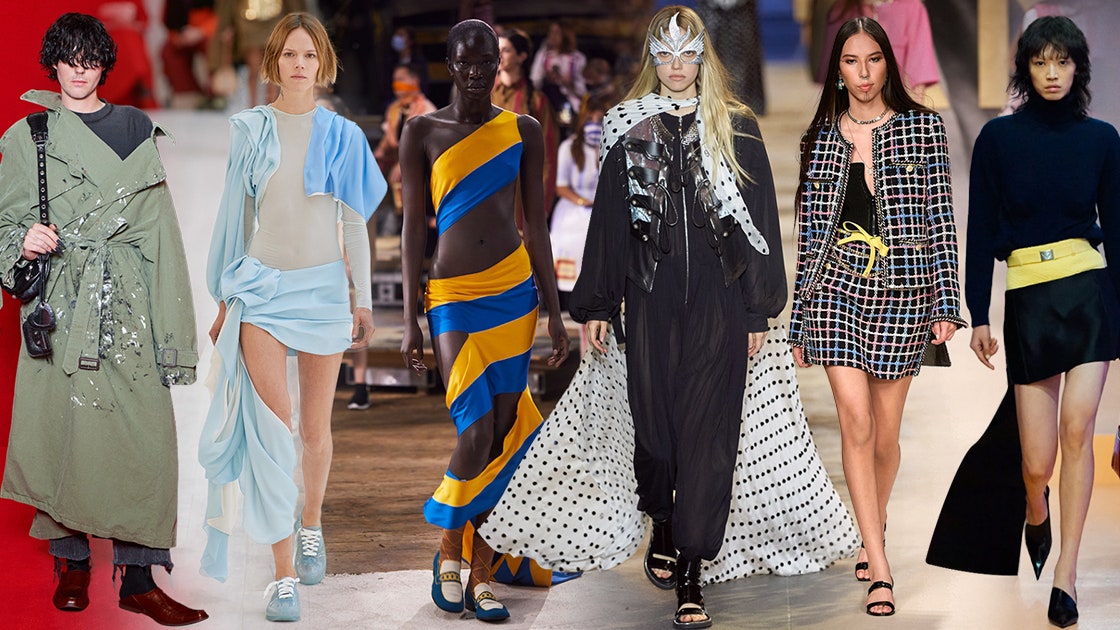 10 Trends That Define the Spring 2022 Season

Did it the spring 2022 season all congeal neatly? No, but doesn’t fashion that’s a little all over the place and yet vibrant, exciting, and fearlessly weird feel right for right now?

As the industry snapped back to the usual fashion month rhythms, the collections that stood out after four weeks of runway shows had less to do with garments and more to do with new modes of presenting fashion. As per our seasonal recap, the shows that we will remember from spring 2022 are the lively experiments that redefined what a show could be, like Balenciaga’s The Simpsons episode, Balmain’s music festival, and Marni’s performance piece with an audience fully outfitted in upcycled Marni wares.

But what of silhouette, texture and color, and material development? The emphasis on shows and showiness actually seems to have freed up designers’ thinking when it comes to clothes. We got everything from Grecian draping at Loewe to exposed torsos at Miu Miu and crisp little skirt suits at Christian Dior. Both Marine Serre and Dries Van Noten put an emphasis on you-have-to-touch-it texture while Botter’s Rushemy Botter and Lisi Herrebrugh and Sunnei’s Loris Messina and Simone Rizzo created sleek surfwear and stripes that come alive on a laptop or phone screen.

Thebe Magugu and Luar’s Raul Lopez rethought the trench as the season’s must-have outerwear while Louis Vuitton’s Nicolas Ghesquière and Valentino’s Pierpaolo Piccioli placed their bets on dramatic capes. Rodarte offered holistic sun salutations and Stella McCartney turned mushrooms into bags. Riccardo Tisci perfected the bum-reveal at Burberry while Mike Eckhaus and Zoe Latta did it with transparent garments that covered up as much as they exposed.

Did it all congeal neatly? No, but doesn’t fashion that’s a little all over the place and yet vibrant, exciting, and fearlessly weird feel right for right now? So, here are 10 trends to try for spring. No basics. No boring thoughts. No rehashing territory and not a pantsuit in sight! Spring 2022 is the time to try something new. Do you dare? 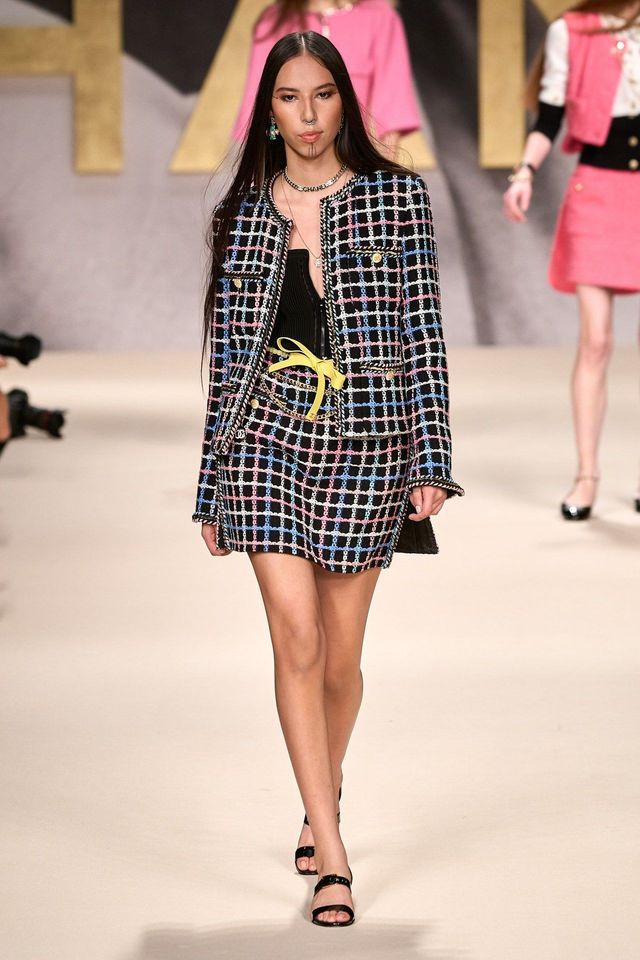 Maria Grazia Chiuri hit the right note for réentrée dressing at Christian Dior, leaving the structure and volupté of the New Look behind for a spritely slim look first introduced by Marc Bohan at Dior in 1961. At Virginie Viard’s Chanel, a similarly carefree spirit emerged, with models like Quannah Chasinghorse and Vittoria Ceretti camping it up on the runway in classic Chanel suits. Even if the catwalks evoke the ’60s or the ’80s, the look of a short-short skirt and blazer remains thoroughly modern. Just ask Olivia Rodrigo, who has made the skirt suit her preppy, punky signature.

Solar Power Colors for the Beach, the Office, and the Nail Salon 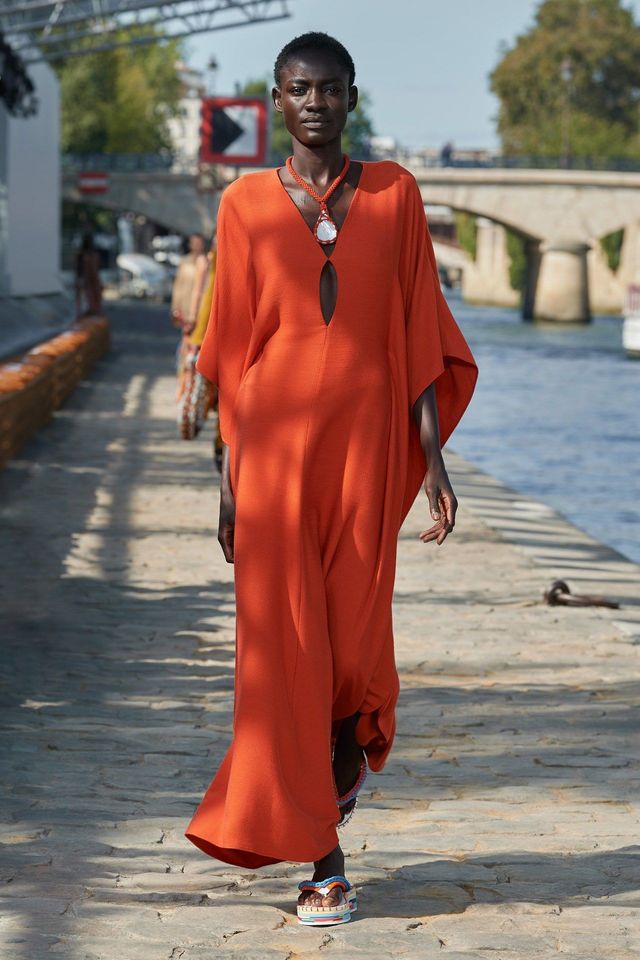 Rodarte closed its spring 2022 show with a sun salutation, but the sisters Mulleavy aren’t the only ones with Vitamin D on the mind. Solar shades like gold, bronze, amber, and marigold abound in collections from Proenza Schouler, Chloé, and many others. All the more reason to go outside this spring-with SPF of course.

Make an Exit With Tails and Trains 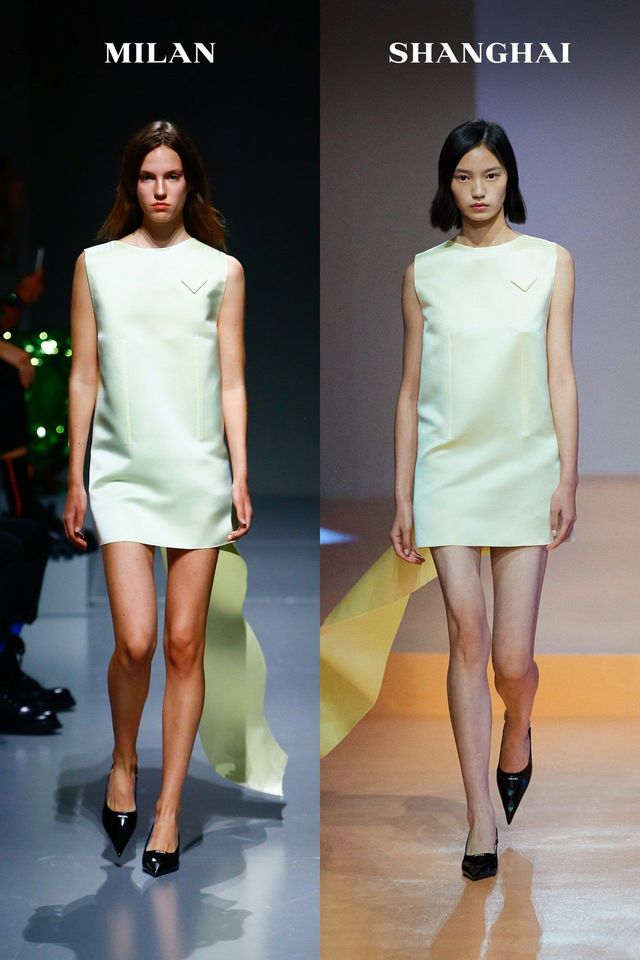 Never has the back view of a garment seemed so essential. At Prada, Miuccia Prada and Raf Simons sliced open the backs of their minidresses and adorned them with long satin trains. Courregès’s Nicolas Di Felice had a similar idea, extending minis several feet behind models, while Louis Vuitton, Rick Owens, and Valentino all showed capes. All the better for making a dramatic exit. 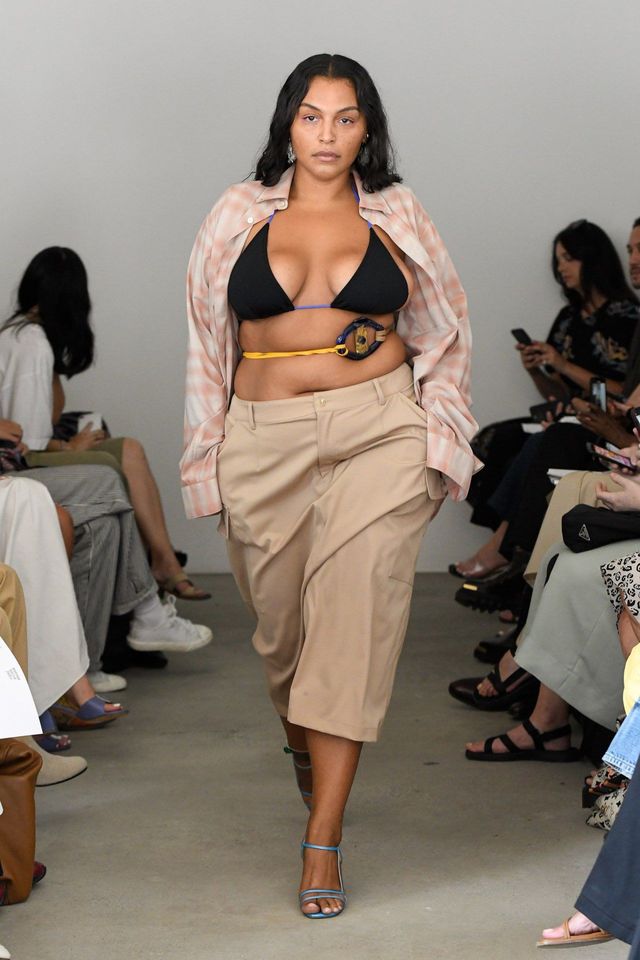 Forget collarbones, décolletage, or thighs, fashion’s new erogenous zone is the torso. At Miu Miu, midriffs went from underboob to upper-pube; ditto at Coperni, Isabel Marant, and even Giorgio Armani. But as many have pointed out, fashion’s new crop tops and low-rise pants have become a mode to emphasize thinness-an especially retrograde idea. Props to Maryam Nassir Zadeh, KNWLS, Collina Strada, and Chromat for showing the look on models with curves. Everyone else, please take note! 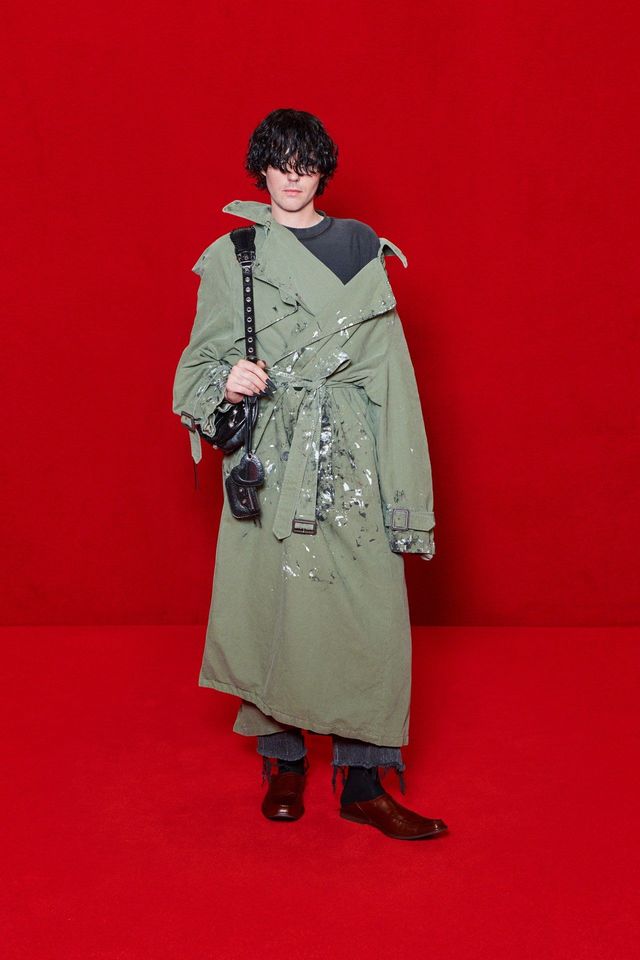 A classic beige trench is a forever wardrobe staple-but the styles shown at Burberry, Thebe Magugu, and Balenciaga are anything but basic. Riccardo Tisci cut out the backs of his trenches; Magugu created one inspired by one his mother wore outside their home in Kimberly, South Africa, and Balencaiga splattered its version with paint and tugged it off the shoulder. Luar’s trench isn’t really a trench at all, but an overcoat cinched with a single leather band. Dua Lipa’s already worn it; will you? 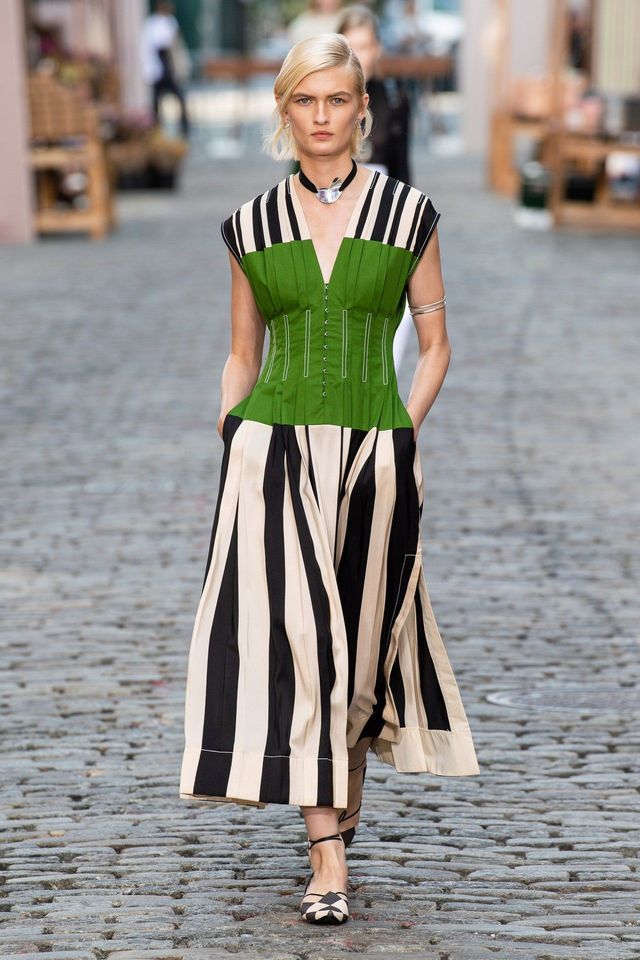 Leave it to Marni’s Francesco Risso to get poetic about prints: “Stripes are strongly associated with direction, where daisies are new beginnings and resilience,” he said after his spiritual show. Florals for spring, you know, are not exactly groundbreaking, but his reliance on sinuous bold stripes definitely takes fashion in a new direction. The same goes for Tory Burch’s mid-century color-blocking, Kenneth Ize’s artful woven lines, and Sunnei’s rugby stripes. Schiaparelli’s Daniel Roseberry said his bold red-and-white looks have a “David Lynch holiday” vibe. No blasé nautical tops here!

You’re a Goddess and Your Body is a Temple 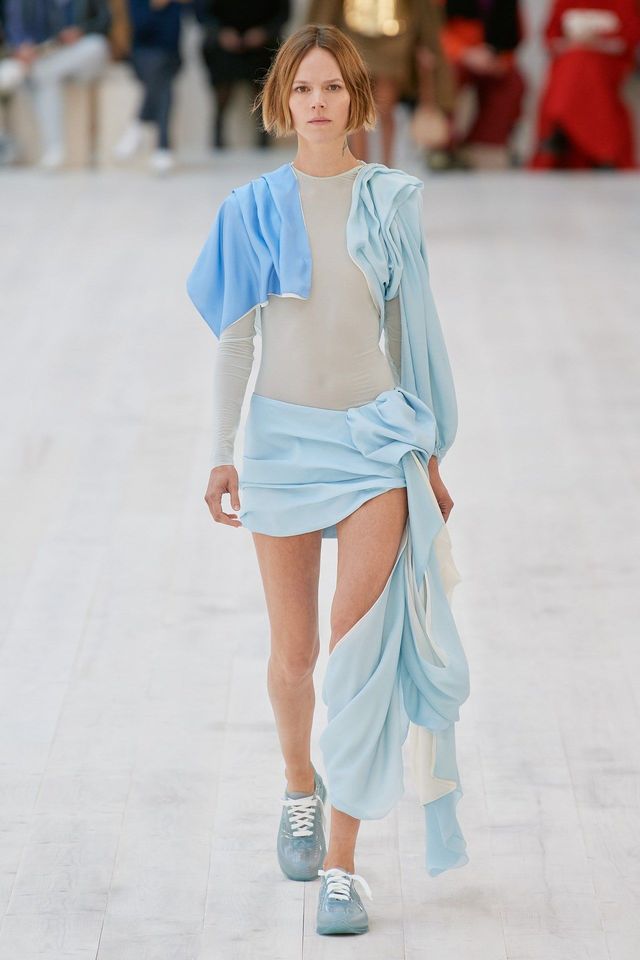 Dimitra Petsa’s wet-look dresses were the look of lockdown, with starlets and It Girls like Gigi Hadid, Yseult, and Kylie Jenner choosing her dripping dresses for red carpets and Instagram posts. Grecian draping has radiated outside Athens, with Rick Owens, Richard Malone, and Loewe’s Jonathan Anderson offering up their own surreal bias pieces on the runway. Think of them as a counter to the overt sexiness of the midriff trend; a subtler way to emphasize the female form.

Tops That Pop, Fluff, and Fray 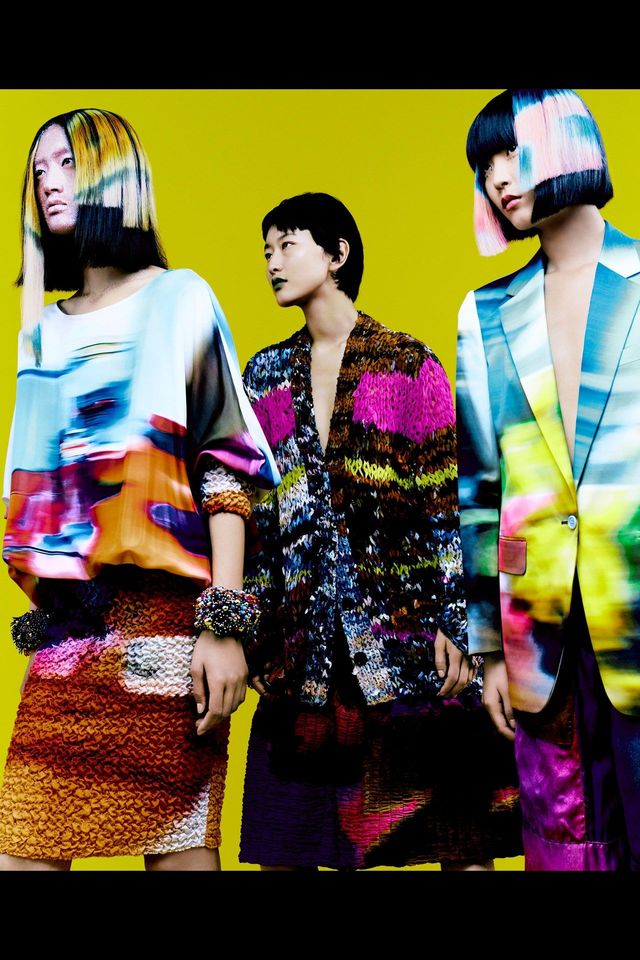 Despite showing their collections as films, both Dries Van Noten and Marine Serre made the case for clothing that has to be touched. Popcorn tops, popular in the ’90s, appeared in both designer’s collections, though credit has to go to the young upstart Chet Lo who has made the feel-good fabric his signature. Elsewhere, Diesel’s Glenn Martens scrunched up denim while Jil Sander, Chopova Lowena, and Undercover put an emphasis on fluff. You’ve got to feel it to believe it. 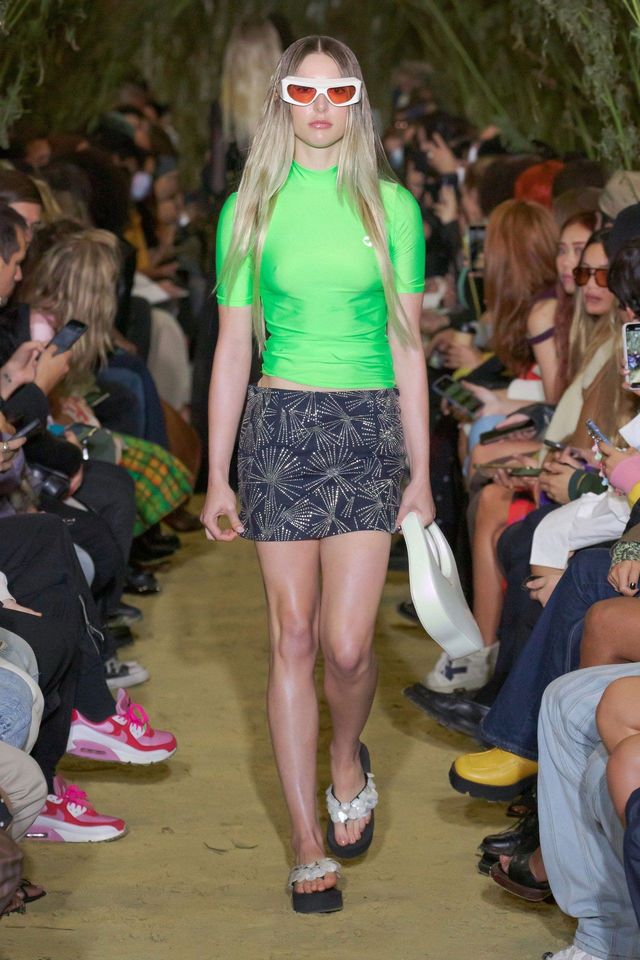 Beachy wetsuits, cute bathing suits, and surfer girl color palettes appeared at Chanel, Botter, Atlein, Anna Sui, and Rejina Pyo. The surfer spirit might be emanating from Venice Beach, where ERL’s Eli Russell Linnetz has made sunkissed and worn-in sweaters a staple of his collection; or maybe it’s coming from Melbourne? The sisters behind Kiko Kostadinov’s womenswear collection channeled their Aussie summers for a collection of seashell-strewn minis and quirky beachwear. 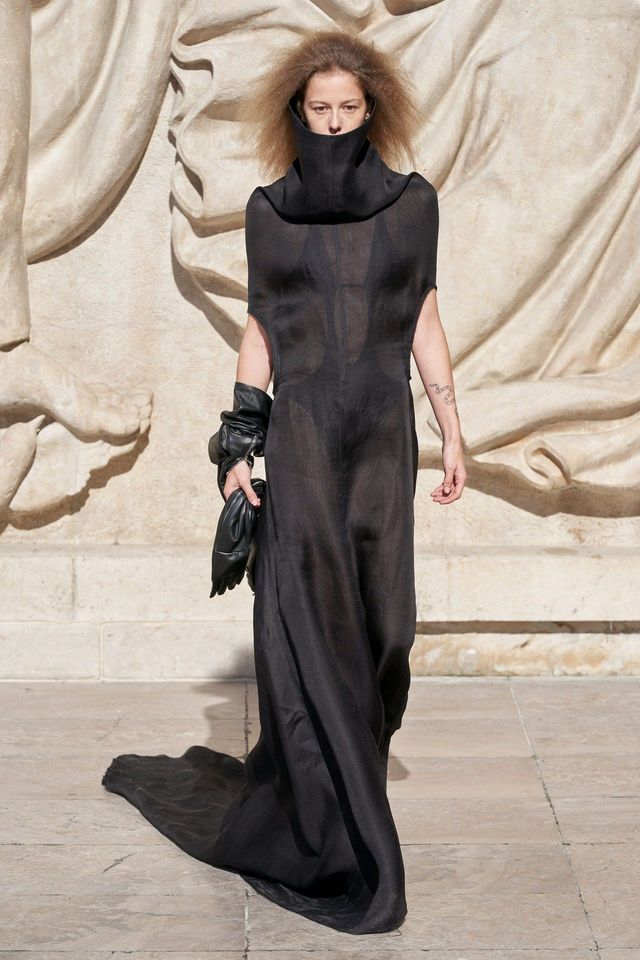 Showing your black knickers under a transparent pair of Eckhaus Latta trousers or a Maximilian dress will be the best way to suggest a little sexiness without showing any skin. The shimmering, transparent cyber gray fabric and see-through black and beige are reminiscent of Helmut Lang’s best pieces; no surprise that the new iteration of Helmut Lang’s brand has plenty of sheer panels and bodysuits.